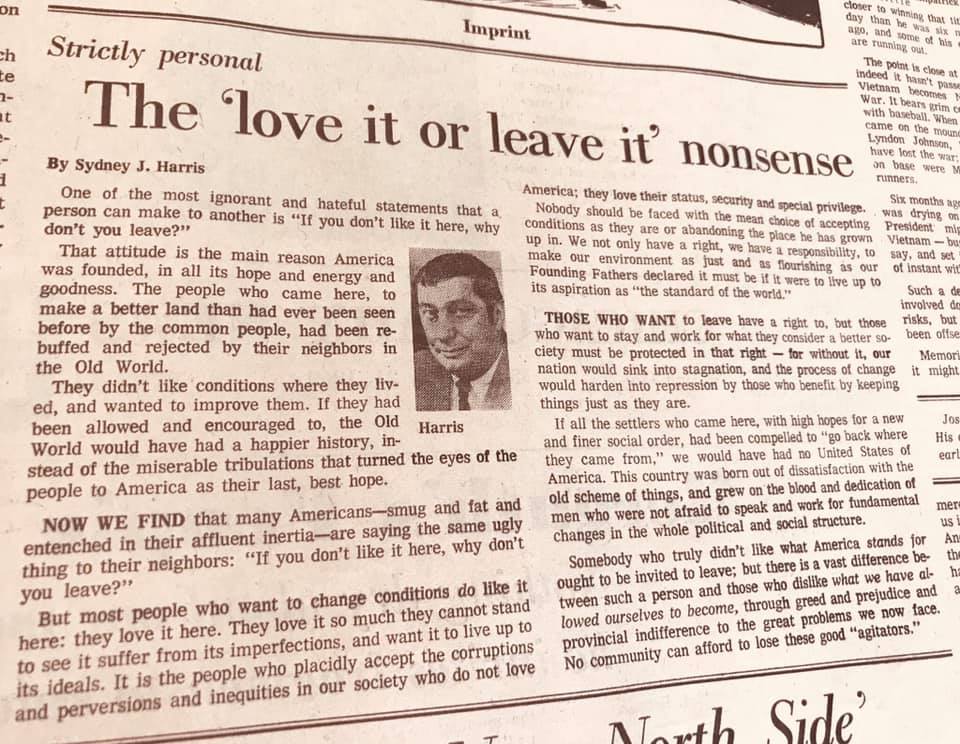 50 YEARS AGO TODAY – The USA put humans on the moon. The Chicago Daily News included a note to readers on how to preserve the news paper of the day, anticipating that many would want to hold a snapshot of this moment.

Reading through the rest of the paper, it is interesting to see that while the price of coffee changed, many of the challenges facing Americans today remain broadly similar to what they were 50 years ago.  Heidi Stevens shared an image of an Op-Ed from July 21st, 1969, by Sydney Harris titled “The ‘love it or leave it’ nonsense:

One of the most ignorant and hateful statements that a person can make to another is “If you don’t like it here, why don’t you leave?”

That attitude is the main reason America was founded, in all its hope and energy and goodness.  The people who came here, to make a better land than had ever been seen before by the common people, had been rebuffed and rejected by their neighbors in the Old World.

They didn’t like conditions where they lived, and wanted to improve them.  If they had been allowed and encouraged to, the Old World would have had a happier history, instead of the miserable tribulations that turned the eyes of the people to America as their last, best hope.

NOW WE FIND that many Americans – smug and fat and entrenched in their affluent inertia – are saying the same ugly thing to their neighbors: “If you don’t like it here, why don’t you leave?”

But most people who want to change conditions do like it here: they love it here.  They love it so much they cannot stand to see it suffer from its imperfections, and want it to live up to its ideals.  It is the people who placidly accept the corruptions and perversions and inequities in our society who do not love America; they love their status, security and special privilege.

Nobody should be faced with the mean choice of accepting conditions as they are or abandoning the place he has grown up in.  We not only have to right, we have a responsibility, to make our environment as just and as flourishing as our Fouding Fathers declared it must be if it were to live up to its aspiration as “the standard of the world.”

THOSE WHO WANT to leave have a right to, but those who want to stay and work for what they consider a better society must be protected in that right – for without it, our nation would sink into stagnation, and the process of change would harden into repression by those who benefit by keeping things just as they are.

If all the settlers who came here, with high hopes for a new and finer social order, had been compelled to “go back to where they came from,” we would have had no United States of America.  This country was born out of dissatisfaction with the old scheme of things, and grew on the blood and dedication of men who were not afraid to speak and work for fundamental changes in the whole political and social structure.

Somebody who truly didn’t like what American stands for ought to be invited to leave; but there is a vast difference between such a person and those who dislike what we have allowed ourselves to become, through greed and prejudice and provincial indifference to the great problems we now face.  No community can afford to lose these good “agitators”.

Many thanks to Chicago Tribune for running this article and Heidi Stevens for doing the research and posting the op-ed from Sydney Harris.. You can follow her at (https://twitter.com/HeidiStevens13) on Twitter.