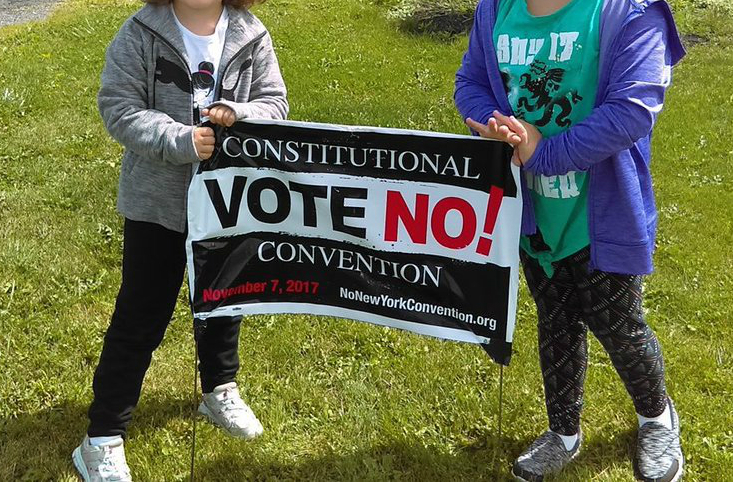 The Saratoga County Democratic Committee encourages you to vote no to a NYS Constitutional Convention.

Tonight, at the Saratoga County Democratic Committee meeting, the Committee voted overwhelmingly to oppose the constitutional convention on the ballot this fall.

Voters will be asked on the Nov. 7 ballot to decide whether the state should hold a constitutional convention to revise and amend the New York State Constitution. Not only could a convention cost at least $50 million-$100 million in taxpayer dollars, the outcome could have far-reaching effects for decades to come.

Reopening the document threatens the basic rights and protections guaranteed in the state constitution, and would become the vehicle to advance attacks on public education, collective bargaining and the environment, among others.

It is not going to be a “People’s Convention,” as some well-financed people would like you to believe. Here’s why:

Most delegates are not your average citizen

During the last convention in 1967, four out of five delegates were career politicians, attorneys and Albany insiders. Every politician who ran that year won a delegate seat, and all of the convention leaders were sitting legislators.


The odds are stacked against ordinary citizens being elected as delegates.

State lawmakers and judges elected as delegates can simultaneously collect salaries and pension credits as elected officials and as delegates.

Instead of wasting tax dollars on a convention …