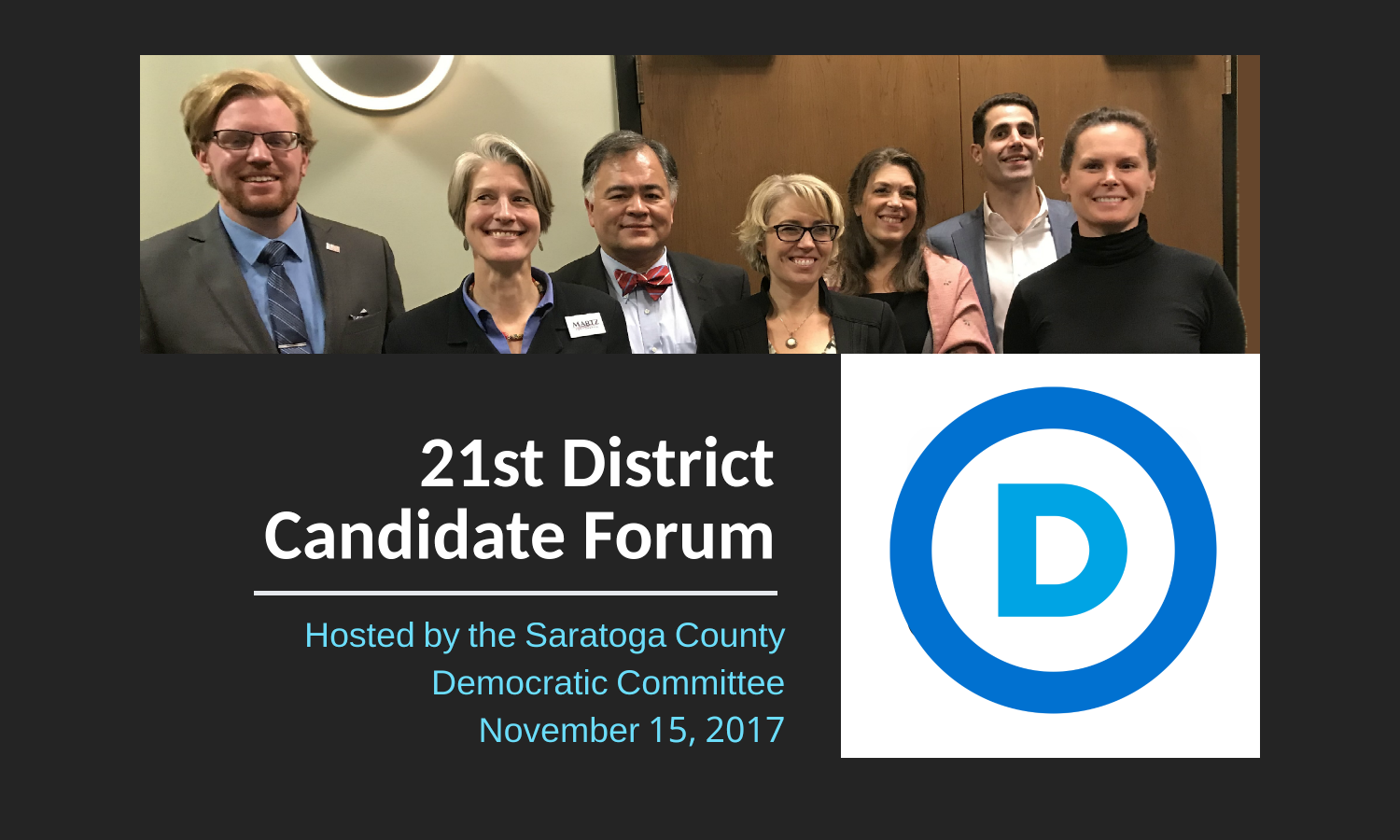 On Wednesday, November 15th about a hundred people crowded in for a Candidate Forum at the Saratoga Springs Public Library to meet the seven candidates who are running for Elise Stefanik’s 21st District Senate seat.

The candidates were asked by Saratoga County Democratic Committee Chair, Todd Kerner about their fundraising achievements and whether they will unite in support of whoever wins the primary.  Candidates Ron Kim, Katie Wilson, Patrick Nelson, Don Boyajian, Tedra Cobb, Emily Martz, and Tanya Boone shared their voices, inspirations and beliefs.

LEARN MORE ABOUT THE CANDIDATES

“I was raised to work hard, earn what I need, and help others along the way. I have the economic development expertise we need to help our rural communities thrive.”

“Almost 20% of children are living in poverty here in the North Country and the average income/capita is only $27,000. These numbers demonstrate why the hard working people of the North Country deserve a working class representative who understands what it takes to make ends meet here in NY-21— someone who knows what it’s like to survive a winter on HEAP and keep people employed year-round in a seasonal economy. I’m here to fight for the hard working families across this region because they deserve a voice in Washington – and because this is my home, too.”

“I am running for congress because you deserve a representative who meets with you, listens to you, and fights for you.”

“I’m running for Congress to represent you and to bring back compassionate, competent government to our home here in Northern NY. When I look at Washington today, I see people driven by ideology and power, not by a desire to serve. I want to bring my principles and a desire for problem-solving to Washington to help address your needs and this district’s needs. My campaign is about the unity of of our whole district. Together we have power. If the people of this district elect me to work for them, there is no issue, problem or difficulty we can’t overcome together.”

“I believe that people who work very hard have gotten a raw deal – in Northern New York and rural areas throughout the country. The rules of the economy have slowly changed over time to favor the very wealthy over our working families, and our leaders in Washington are making it worse. Simply put, I’m fed up and it’s why I’m running for Congress.”

“Upstate New York is getting a raw deal.  We deserve better.”

View all posts by roppenneer →