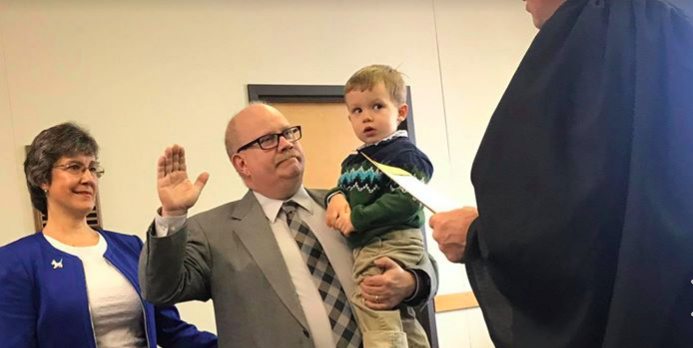 Last week inaugurations for municipal offices took place across Saratoga County as Councilmembers, Commissioners, and Supervisors took their oaths of office for two-year terms beginning in 2020.  In the four contested races for the office of Supervisor, two Democratic Party-backed candidates successfully challenged incumbents in Ballston and Milton, and one maintained her seat, holding on to one of two supervisor seats in Saratoga Springs.

Oaths of office were administered in Town Halls and other public venues between January 1st and January 6th.  Most ceremonies also gave newly elected officials an opportunity to address the public with their focus and plans for their terms.

In Ballston, newcomer Eric Connolly (D/R) defeated two-term incumbent  Timothy Szczepaniak in the race for Town Supervisor.  Connolly, running with Charles Curtiss and Peter Solberg as part of a multi-partisan slate labeled “Connolly-Curtiss-Solberg, A Change For Good”, received the endorsement of the Democratic Committee for the Town of Ballston and the Saratoga County Democratic Committee prior to winning the primary on the Republican ballot line.

One of Connolly-Curtiss-Solberg’s major platform planks was ensuring growth in Ballston reflects the will of the residents.  Curtiss, a town council incumbent who was supported by the Republican Party in his previous race, was specifically not endorsed in 2019 due to his opposition to town council resolutions that were not in line with The Comprehensive Plan.

In his inaugural address, Supervisor Connolly committed to looking at best practices across the US as he seeks to balance expected growth, financial responsibility, and a desire to maintain Ballston’s agricultural base for years to come.  “We’re a Farms First Community, and we are going to be a Farms First Community.  We have plans to take a second look at the zoning package that just passed.  And…the TDR [Transfer of Development Rights] system.  If you’ve never read anything about it, there’s 252 municipalities across the U.S., at least the last time that I read, that have successful TDR programs.  We’re studying the top 20. The top 20 have really preserved tens of thousands of acres of agricultural land that is preserved in perpetuity forever for those communities. Without forgetting to develop certain sectors of the town, there is a way to do this.”

In Milton, a similar multipartisan slate ran against what had become seen as an “in-club” that preferentially favored select residents and other supporters of the sitting incumbents.  Benny Zlotnick (D/C/I) defeated incumbent Scott Ostrander as part of the The “Moving Milton Forward” slate, which also consisted of Barbara Kerr and Ryan Isachsen running for Town Council. The Town of Milton Democratic Committee, which endorses candidates by caucus, supported the slate, guaranteeing them a place on the ballot alongside the Conservative and Independence lines, which were secured by primary election.  The Moving Milton Forward slate faced down scorched-earth invectives leveled at them from the local Republican Party, but were unfazed in their quest to represent all the residents of Milton, not just the registered party loyalists.

Even prior to taking office, Moving Milton Forward put out a call for openings on various town committees, as a first step in their pledge to ensure inclusive representation on committees that were increasingly seen as “stacked” in favor of well-connected Republican party members. CITY OF SARATOGA SPRINGS

Running on her record of advocacy for public services and efforts to bring clarity and transparency to what is often an opaque, closed-door process of county legislation, Supervisor Tara Gaston (D/WF) won her second term in office in Saratoga Springs as one of two Supervisors serving the city.

In her inaugural speech, she recounted the successes she had in her first term, including ensuring the county-wide School Resource Officer implementation was dependent on student mental health services being put in place, a second representative on the Capital District Transportation Authority for Saratoga County, and her work on state and national committees of county officials to place Saratoga County concerns in front of legislators, lobbying for the needs of Saratoga County and other similar counties across the country.

“But the work isn’t over and I look forward to another busy term”, Supervisor Gaston said.  “This term I will continue my focus on transparency and accountability in government.”  While maintaining her subcommittee work and other Supervisor responsibilities, she will focus on two main issues in her upcoming term.  First, resiliency of Saratoga County in the face of climate change, with an emphasis on preparedness, including of emergency response services in the face of increasing extreme weather events and health initiatives to combat increased disease vectors as insect and tick populations change.  Second, solutions for homelessness, not only including a permanent Code Blue shelter and also possible shelter from extreme heat events, but also a Housing First model, which has been proven to significantly improve outcomes for homeless populations as well as ultimately reduce the burden on public services.

Elsewhere across the County, incumbents generally carried the day in local elections, with candidate slates that included both incumbents and newcomers capitalizing on running combined campaigns.  In Stillwater, Valerie Masterson (D) won one of two open seats on the Town Council, and in Moreau, John Donohue (D) earned a seat on the Town Council by a convincing margin.  Also in Saratoga Springs, John Franck (D/WF/I), who ran unopposed, was sworn in for another term as Commissioner of Accounts, a City Council legislative position that also serves to oversee the Department of Accounts.

At the Board of Supervisors organizational meeting, Preston Allen (R) of Town of Day was selected for the position of Chairman.  As part of the organizational meeting, subcommittee chairs were appointed by the Chairman, leading to concerns about the more populous municipalities being shut out of the committee selection process.  None of the appointments were from the towns of Ballston, Clifton Park, Halfmoon, Malta, Milton, Moreau, or Wilton.  Supervisor Veitch (R/C/I) of Saratoga Springs, in his seventh term on the Board, was appointed chair of the Buildings and Grounds Committee.

Legislation brought before the entire Board of Supervisors for vote normally originates in one of the nine subcommittees, giving the chairs of the subcommittees the ability to control what goes before the board as part of a normal legislative process, not unlike those used at the state and federal level.  By cutting out the major municipalities of the county, legislative priorities are likely to skew towards the outlying towns.

Additionally, Supervisor Gaston of Saratoga Springs was removed from the Health and Social Services Committee, dealing a blow to Saratoga Springs which hosts many county services including the Code Blue shelter.

Said Supervisor Gaston, “I am disappointed to be removed from a committee with significant needs outstanding – needs which had been my focus over the last term, including Code Blue, expansion of the public health department, and confirming access to public health and other services after the completion of the new public safety building. This removal will not stop my advocacy for Saratoga Springs and the greater Saratoga County to make certain that all in Saratoga County have access to the services they need to be healthy and thrive.”

More information on the Saratoga County Board of Supervisors, including contact information, can be found at here.